Living Well With Dementia Through Music

Nobody survives or outlives dementia. Once the disease has you in its grip, you’re on a journey from which there is no return.

Indeed, all dementias are both progressive and incurable. It’s a sobering thought – one which many people have difficulty facing up to.

In the aftermath of such a devastating diagnosis, you might wonder how people find the strength to go about their daily lives.

Yet they do. And Alzheimer’s Society is there for them every step of the way – whether it’s offering expert advice to those concerned about memory loss, or helping them pick up the pieces after a diagnosis.

Above all, there is one key message we try to impress on everyone we come into contact with – you can live well with dementia.

We don’t say it to soften the blow or to mask the grim reality of their situation. We say it because it’s true.

Our ultimate goal is a world without dementia, but a cure is still a long way off. Incredibly, only 3% of the government’s medical research budget benefits dementia – and overall dementia research receives seven times less funding than cancer.

So whilst investing in research is vital, we must also ensure we have the best possible services in place for those living with dementia. 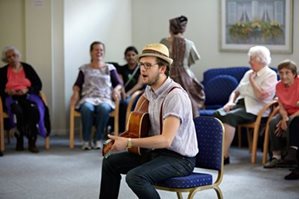 One of our most popular services is Singing for the Brain. We know music is unique in its ability to stimulate memories and emotions – and now scientists are researching this connection in greater detail.

A recent study showed people with dementia have enhanced mental performance after singing.

In other words, the act of singing a familiar song – as opposed to simply listening – appears to make people more alert not just during the performance, but afterwards also.

Even people who can’t recall the names of their loved ones or recent events have an uncanny ability to remember song lyrics and tunes with unerring accuracy.

Researchers are trying to understand why areas of the brain not associated with the act of singing are nevertheless stimulated by it – enabling people with dementia to exercise more brain power than normal, albeit temporarily.

Our dementia support workers have witnessed this surge in lucidity many times during Singing for the Brain groups.

And I can you it not only puts a smile of the faces of people with the condition, it lights up those of their loved ones too.

Singing for the Brain sessions take place at locations across Northumberland, including Hexham, Blyth and Alnwick. For more information about these and other services operated by the Alzheimer’s Society please visit the website.