How To Become More Dementia Aware - In Just 1 Hour

Alzheimer’s Society has just marked an important milestone in its mission to create a safer, more inclusive world for people living with dementia

That’s because there are now an incredible two million Dementia Friends across England, Northern Ireland and Wales - including almost 5,000 in Northumberland. 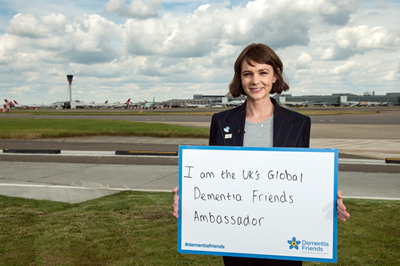 We are rightly proud of this achievement. The initiative is, after all, the biggest ever social action movement to change perceptions of dementia.

And we’re fortunate enough to have the hugely talented BAFTA award-winning actress Carey Mulligan as our Global Dementia Friends Ambassador.

But we appreciate that those unfamiliar with the term ‘Dementia Friend’ might find it a difficult concept to grasp.


So what does it mean? Put simply, a Dementia Friend learns a little bit more about what it's like to live with dementia and then turns that understanding into action.

One of our information sessions takes about an hour to complete. People either attend a session run by a Dementia Champion - someone who has undergone additional training – or log on to our website and watch a video.

It’s incredibly easy and is open to people of all ages. After the session you will be asked to commit to an action - but it doesn’t have to be time-consuming.

You could, for example, stay in touch with someone you know who is living with dementia, or volunteer for an organisation that helps people with the condition, even if it’s just for a couple of hours.

The important thing is that by becoming a Dementia Friend, you will be more aware of the day-to-day challenges faced by people living with dementia and, hopefully, be more considerate and understanding towards them as a result.

You can find out more by visiting https://www.dementiafriends.org.uk/.