"An Evening of Stand up Comedy" in aid of Parkinsons UK

Parkinson’s disease is a neurological condition, which currently has no cure and it is still unknown as to why people develop the condition. Around 127,000 people in the UK have Parkinson’s, that’s 1 in every 500 people in the UK. The last major breakthrough for Parkinson’s was over 50 years ago with a new drug discovery, which does not slow down, stop or reverse the condition or its symptoms. Currently the drugs can only mask the condition, with extreme side effects. Parkinson’s Awareness Week is organised by Parkinson’s UK, a UK charity who drive better care, treatments and quality of life for everyone living with Parkinson’s. Parkinson’s UK can provide expert information, fund ground-breaking research as well as fundraising to find a cure. For this year’s awareness week Parkinson’s UK are asking everyone to support their research any way they can. Bluebird Care The Vale hope to raise awareness of Parkinson’s and the strong need for research funding within The Vale of Glamorgan. Bluebird Care The Vale is proud to support "An Evening of Stand up Comedy" at the Chapters Arts Centre in Cardiff, in aid of Parkinson's UK, which raised a grand total of £883.32. 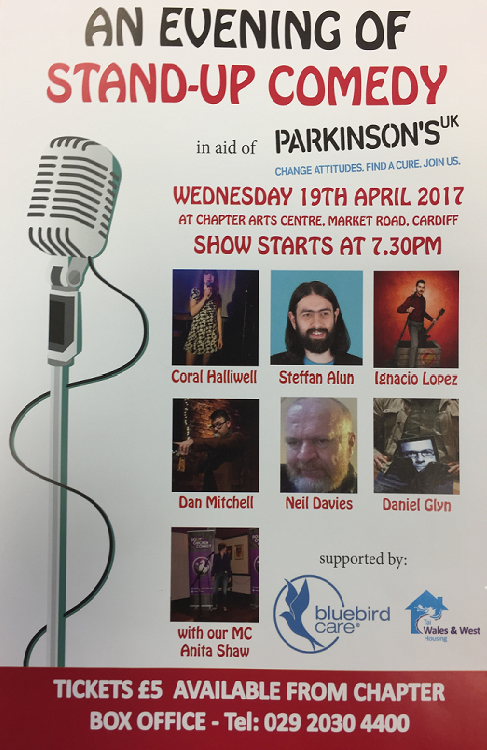 Huw Owen, director of Bluebird Care The Vale commented: “It is important to us at Bluebird Care The Vale to support campaigns such as Parkinson’s Awareness Week, as it is likely that our very own customers may be living with this condition. Being in the care sector, we have a platform to raise awareness of this campaign in our community and support local fundraising activities to help fund Parkinson’s UK amazing research.” Visit the Parkinson’s UK website, to find out more about the campaign and how you can get involved.