For a long time, John wanted to be as independent as possible. If he wanted to do something and was being slow they gave him the time to do it. 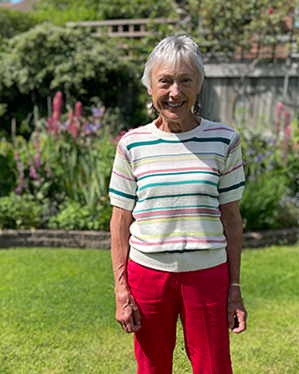 My husband was a fit man. He was a field hockey player who competed at the 1964 summer Olympics and played hockey all his life. It was while he was playing that he noticed his arms and hands becoming weaker. John was diagnosed with Motor Neurone Disease at the age of 77 and died five years later.

The care assistants from Bluebird Care were incredibly important to me. I could see they cared, and they were skilled, and I absolutely trusted them.

I was 20 when I met John at university. He was coming out of the squash courts and when we were introduced, I thought: ‘what magnificent blue eyes you have.’ I can remember it to this day.

We married in 1966 and John became a manager responsible for overseas contracts for a large engineering firm. In 1973 we moved into this house.

The care assistants started coming here about six months after John was diagnosed. It was the same two care assistants who were with me right to the end. They got to know John and what he was like. They understood what he was going through and could see the changes that were happening to him. That continuity of care was so important and a great tribute to Bluebird Care.

At first they came for half an hour every week to make him coffee and see that he was all right while I went to the library. They came more and more as the disease developed until carers were coming in the morning and the evening, and also four nights a week.

They got him out of bed, washed and dressed him. In the evening they hoisted him up and into the wheelchair and hoisted him into bed.

They were filled with compassion. They realised what an independent man he had been and that asking people to do the most personal jobs for him wasn’t easy for someone of his age and personality. They made it easy for him so that he could accept it and wasn’t overcome with embarrassment.

For a long time, John wanted to be as independent as possible. If he wanted to do something and was being slow they gave him the time to do it.

‘You are doing really well,’ they’d say. They gave him dignity and helped his morale by being supportive.

They made him laugh too. If anything funny happened to them, they told him. Of course, he liked that. He didn’t want people to focus on his illness all the time. He talked to them about sport.

The care assistants became friends during the time they came. I knew about their families and that was lovely. They kept me going and were very supportive of me. If I was really worried about John I could talk to them and they’d tell me what to do and boost my confidence. We were so lucky to have them.

On John’s last morning I called one of the care assistants and told her I was worried about him. I asked her if she could come early and she said she was on her way. I held John’s hand and she held my hand. It was very important, a sign of her support for me.

The two carers came to John’s funeral and I was pleased to see them there. They made an amazing difference to my life.

I knew that John wanted to stay in his own home and that was important to me. I knew he was frightened about what the end was going to be like. I wanted him to be at home so I could be the best support to him that I could. John wanted to die here. There were memories of his family around him, in the bedroom where he slept to the very end.

There are photographs here of when we got married, and of our children and grandchildren. There are pictures of John playing hockey and there’s the shirt he wore to take part in the Olympics. On the wall there’s a painting of the Dordogne where we spent happy holidays.

John was a really nice man, an absolute gentleman. He was very happy with the care that Bluebird Care provided for him. They never let me down.

Find care near you

Enter your city or postcode below to find your local office 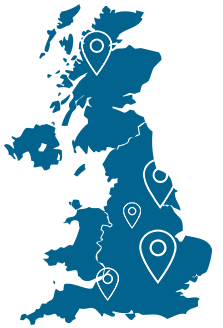