Our customers talk about how Parkinson's has affected their lives 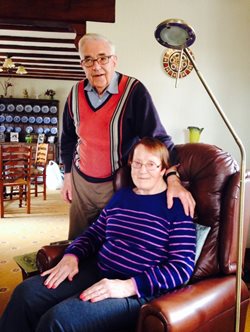 As part of our Raise Awareness for Parkinson’s week, Care Manager Jayne Wakefield talked to Bluebird Care Cheshire East customers  June and Geoff (pictured)  about how June being diagnosed with Parkinson’s disease 10 years ago has affected their lives.

June and Geoff grew up on busy working farms. They met at a young farmers dance, married in 1957 and continued to pursue their farming heritage, acquiring a near derelict property with land for dairy and crop farming. They both worked hard in these formative years developing their farming business, building a beautiful farmhouse and raising a family of two sons and a daughter. Both were involved with many committees, social activities and volunteering. They enjoyed travel and a busy social life. Following the family tradition, their son took over management of the farm and the couple looked towards a long and happy retirement together.

June first noticed something ‘wasn’t quite right’ ten years ago when she observed a tremor in her thumb and a pain in her knee when driving. June openly admits she ignored the issues for a while but on visiting her GP, referral to a neurologist and a diagnosis of Parkinson’s disease soon followed. The couple say they were “floored” by the news. Neither knew what to expect or enough about the condition generally.

June has experienced a lack of understanding of the condition over the years and feels better communication amongst hospital healthcare professionals is warranted to help sufferers cope with the limitations of their condition. Geoff adds that no “one size fits all” in an approach to assisting people with the disease. June concurs that not everyone with Parkinson’s is the same; that her experience is unique to her and would be quite different in another sufferer.

I asked how Parkinson’s had affected their general day to day life. June smiles as Geoff recalls how he has had to learn to do the washing, cooking and ironing! A diagnosis of arthritis has further impacted on June’s mobility and now she requires a wheelchair when going outside of the house. They still enjoy dining out and Geoff tells me that he always informs the restaurant in advance that they have a wheelchair so space is afforded. The couple have enjoyed many holidays although June admits it is getting so much more difficult to venture out, not least due to social discomfort. Geoff relates a story about a function they attended where everyone was standing around the bar drinking and June was sat in her chair in the corner. June says “It’s difficult to feel included when everyone is standing well above your eye level”

I asked June what she missed the most about her life before the effects of Parkinson’s and arthritis, to which she replied; “It’s the loss of independence. I miss not being able to walk out of the door and down the fields”. Both June and Geoff have adopted the philosophy of ‘one day at a time’. They have built up a network of support that is very important to them and they value the relationships they have with their Bluebird carers. They spoke of carer Diane in glowing terms, saying how she had the right attitude and approach to June’s care, arriving in the morning with enthusiasm and an approach that “lifts the spirits”. In describing the qualities of an ideal care worker June points out that “patience is so very important” as she “can’t be rushed”.

I thanked June and Geoff for allowing me into their beautiful home. This time with the couple has certainly given me pause for thought.  I completed the ‘Up Your friendly’ challenge for Parkinson’s awareness week, taking  a little more time daily to consider those around me by giving in small ways. We all get so busy with the day-to-day management of the service and sometimes lose a sense of the real challenges that individuals are facing, pursuing the choice to remain at home. My awareness of Parkinson’s disease has certainly been raised. It’s a privilege to actually connect with the people we support and understand first-hand the challenges they face.