Differences between dementia and Alzheimer's

By 2025 the number of people living with dementia in the UK is set to rise to over 1 million. In this year alone, 225,000 people will develop dementia, that’s one person every three minutes. Given these facts, it is surprising that a large number of people do not know the differences between dementia and Alzheimer’s disease.

Dementia is an “umbrella” term that describes symptoms that occur when the brain is affected by a range of different diseases and conditions. Usually beginning with small episodes of forgetfulness, dementia will cause the victim to lose their concept of time and their ability to find their way in familiar settings. As dementia becomes more severe, the person will become progressively more forgetful and confused. It will be a challenge for them to remember faces and names and they will eventually be unable to care for themselves independently.

Amongst the many forms of dementia some are much more common than others:

The cause for 50 - 70% of dementia cases. The Alzheimer’s brain becomes damaged years before symptoms become known, and will gradually ruin memory and thinking skills, ultimately destroying the ability to do everyday tasks.

Alzheimer’s is sadly incurable, unlike other forms of dementia which can be treated and potentially cured. The disease is also very aggressive and quick to develop, with some people dying as little as three years after diagnosis. This short amount of survival time is mostly in people over 80 years old, with younger patients occasionally surviving 10+ years with the disease; It is very rare however to be diagnosed with Alzheimer’s below the age of 65.

There is medication available that can manage Alzheimer’s, however researchers are yet to discover how to  reverse this devastating disease.

Vascular dementia is the second most common type of dementia and affects roughly 150,000 people in the UK.

Lewy bodies are small deposits of protein in nerve cells.

Often mistaken for other conditions, dementia with Lewy bodies has very similar symptoms to Alzheimer’s and Parkinson’s disease. There is not yet a full understanding of how they trigger dementia, however the presence of Lewy bodies is linked to the loss of connections between nerve cells and low levels of essential chemical messengers. As with Alzheimer’s there is a gradual death of nerve cells and decrease in brain tissue.

One of the less common types of dementia, Fronto-Temporal dementia occurs when the two lobes at the front of the brain are damaged.

The front lobes are incredibly important as they control behaviour, emotions and language. Although it is less common than other forms of dementia, Fronto-Temporal damage is a significant cause of dementia in those under 65.

In the latter stages of HIV and AIDS cognitive function can be impaired and lead to dementia, and diseases such as Parkinson’s and Huntington’s can also act as a trigger. Heavy drinking over a long period of time occasionally causes dementia symptoms as well, however this type of disorder is not technically a form of dementia.

Due to Alzheimer’s being the most common cause of dementia, it has also become the most well known. This leads people to become more familiar with the term Alzheimer’s than dementia, causing people to confuse the two as either the same thing or entirely separate issues. That’s why it’s important to outline the differences clearly, particularly given the fact that over the next 20 years there will be 75.6 million people worldwide living with dementia, with well over half of those cases caused by Alzheimer’s disease. 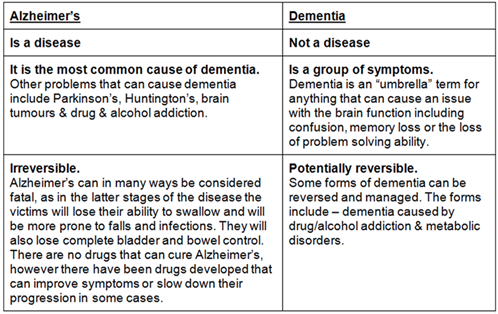