Andrea and her team complete the Everest Base Camp Challenge!

Andrea Sheardown and her team have completed their climb of Everest Base Camp for AMMF, to help raise awareness of Cholangiocarcinoma!

Andrea Sheardown has completed her climb of Everest Base Camp for AMMF as a cancer survivor and to help raise awareness of Cholangiocarcinoma!

Andrea said: “we started our trek on the 15th February, arriving at Everest Base Camp on Saturday the 22nd February. It was a huge challenge, dealing with the rocky terrain and extreme weather conditions, but we all worked as a team and with the expert help from the fantastic guides and Sherpa's, we all successfully made it!”

We have previously reported on Andrea's fundraising, including her cycle ride from Vietnam to Cambodia, and her climb of Kilimanjaro, Snowden, Scafell Pike and Ben Nevis! Bluebird Care Cheshire East have a longstanding relationship with Andrea Sheardown’s publication, ‘The Effective Directories’ which advertises our services to the community.

From her fundraising Andrea has raised over £46,000 for the charity AMMF. AMMF is the UK’s only Cholangiocarcinoma Cancer charity. Andrea was diagnosed with Cholangiocarcinoma in October 2015. Cholangiocarcinoma is a very rare form of bile duct cancer, known as a “silent killer”. Cholangiocarcinoma has one of the worst survival rates of all cancers, it is difficult to diagnose accurately and early, so by the time of diagnosis it is often too advanced for surgery (which is currently the only potential cure). Andrea was initially given just 6 months to live, but she managed to defy the odds after undergoing major surgery and 6 months of gruelling Chemotherapy.

Andrea's team of supporters have been nicknamed “Andrea's AMMF Army”. For her Everest climb Andrea was joined by her husband Chris, her 16-year-old son Sam, her sister Mandy and 12 other amazing friends!
Alongside her climbs and epic cycle ride Andrea has also organised lots of fun and challenging fundraising events. From charity ladies’ nights, climbing the 'Three Peaks' in the middle of winter, fire walking, a 'Mad Hatters Cycle Tea Party', to bag packing at local supermarkets.

We are so pleased to be able to support Andrea's fundraising and send a huge WELL DONE to Andrea and her team! Donations can still be made via Andrea's JustGiving page. 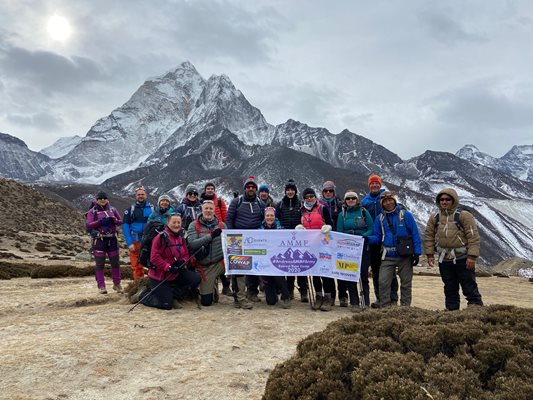