This year the voting was very close and just two votes separated 11 people in the customer chosen Carer of the Year. In the staff chosen Team member of the year it was equally tight with 9 carers within 2 votes of the winner.
So without further ado… 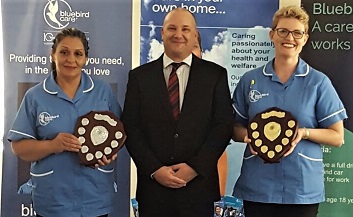 Gillian deserves a special mention.  Having been one of the first joiners to have to do the new First Aid module introduced last year..(at which staff are reassured that they will probably never need to use these new skills)…Just weeks later Gillian gave artificial resuscitation to a customer at their home..called 999…calmed the family…On call desperately tried to cover her following shifts but due to sickness and holidays were unable to. Gillian just quietly and professionally carried on with her remaining shifts. None of her customers were aware of what Gillian had just done as she remained composed , professional and respected her customer’s privacy. A model carer and employee.

​Well done to both of the very worthy winners who have had their names added to the plaque in our reception area. Both ladies received an individual plaque to take home in addition to a weeks accommodation in a luxury apartment in Cyprus!