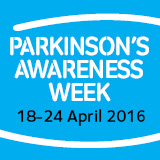 We’re delighted to support Parkinson’s Awareness Week 2016, an annual campaign run by Parkinson’s UK, from 18-24 April.
Parkinson’s UK are the leading UK charity associated with leading, influencing and funding research to ensure new and better treatments for the condition.

The charity offers support to everyone with Parkinson's, their families and carers, as well as actively raising awareness, changing perceptions and work in partnership to drive better services for those living with the condition.The aim of this fantastic campaign is to reach more people who are affected by Parkinson's and tell them about the charity’s work and the support that they offer.

Join Friday's 'Use your Head' campaign

Bluebird Care Trafford is taking part in the Use Your Head campaign on 22 April 2016, asking people to wear something smart, stylish or downright silly on their head for a whole day and to make a small donation to the charity for doing so. This campaign coincides with Parkinson’s Awareness Week 2016, and we are looking forward to raising money for such a great cause.

Ian Helsby, Bluebird Care Trafford managing director says, "We’re thrilled to support Parkinson’s Awareness Week and help raise awareness of this condition. We want to help break down barriers and inform the Trafford community about the support that's available to people with Parkinson's and their families. We'll be wearing silly hats this Friday and making a donation to this excellent charity. Please do the same."

Visit the Parkinson’s UK website, to find out more about Parkinson’s, the campaign and how you can get involved.