Our first ever Community Grant is awarded to the East Devon Parkinson's UK Support Group!

We are so pleased to announce that we have awarded our grant of £500 to the East Devon Parkinson’s Support Group to support them in the running of their weekly exercise classes for Parkinson’s sufferers.

We awarded the Community Grant to the Support Group after receiving several applications for the £500 Grant from voluntary organisations and projects across Exeter and East Devon.

Director of Bluebird Care Exeter & East Devon, William Flint said “We were really pleased to have received such a high number of applications for our first ever Community Grant – all of which were for such worthy causes. However, we felt the work the East Devon Parkinson’s Support Group does has such a positive impact on so many people – from the person living with Parkinson’s to their family and loved ones.

The Parkinson's Support Group was chosen by the staff at Bluebird Care from a shortlist of other applications and the cheque for £500 was presented on behalf of Bluebird Care by our Director, Sara Flint and East Devon Business Leader, Jasmine Broome on Thursday 13th August during one of the exercise classes. 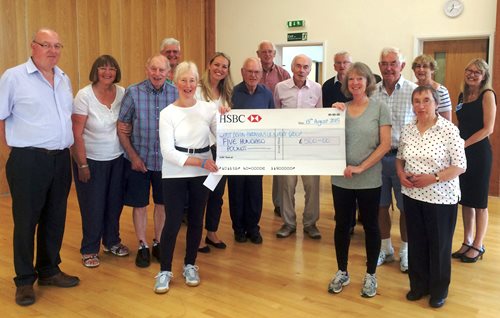 Rosemary Hacker, Coordinator from the Support Group said “We were thrilled to hear that we have been awarded this Community Grant as it will help us to continue running weekly exercise classes at a price the members can afford and to enable their carers, if they wish, to take a well earned break.  The classes, run by qualified Physiotherapists who have a wide knowledge and experience of Parkinson's, help participants with their mobility, posture, strength, flexibility and balance - all so important for their safe independence. Also, the friendliness and humour of the group are uplifting , giving all who attend  - carers included - an increased sense of wellbeing.”

Rosemary also said that “Fundraising for the group is made difficult by the nature of the disease as those who would usually help with fundraising are the full-time carers of the Parkinson’s sufferers. That is why we are so grateful for the Grant awarded to us by Bluebird Care; it means we are able to provide hours of respite for carers and increase the mobility and independence of approximately 60 people living with Parkinson's.”

Jasmine Broome said “The work the East Devon Support Group does is outstanding and I know our Grant will be put to good use to continue this excellent work in supporting Parkinson’s Sufferers and their carers in East Devon”.

Bluebird Care Exeter and East Devon are now accepting applications for our next quarterly grant – to be awarded in October.

The closing date for applications is Thursday 1st October 2015 and for more details, or to receive an application form, contact Bluebird Care on 01392 426 006, email exeter@bluebirdcare.co.uk or click here.