Back in 2012 The Alzheimer’s Society launched a brand new initiative; “To create 1 million ‘Dementia Friends’ by 2015” – they smashed the target which was an incredible achievement! Now, their target is to create 4 million Dementia Friends by 2020, one that Bluebird Care Exeter & East Devon, are taking an active role to help achieve.

A ‘Dementia Friend’ is someone who has learnt what it’s like to live with dementia and then turns that understanding into action and one of the best things is that anyone of any age can become a Dementia Friend.
Here at Bluebird Care, we look after many customers and their families that are affected by dementia, so we understand the hidden or lesser known signs and impacts of the disease. However, dementia is not a straightforward condition and out in the community it is not easily identifiable – people don’t carry a stick or have a guide dog; it lacks well know visual signs. Dementia Friends is looking to rectify this – it aims to provide people with a better understanding of dementia, what the symptoms might look like and how to approach and interact with someone who has dementia. 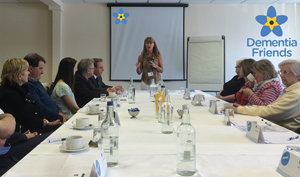 We have two Dementia Friends Champions; William Flint, Director and Leigh Richardson, Head of Quality and Development, both are regularly out in the community running Dementia Awareness Sessions.

Both Will and Leigh understand what a difference to people’s lives an understanding of and patience towards dementia makes. They are passionate about The Alzheimer’s Societies efforts to create Dementia Friendly Communities, which is so important in Devon which sees one of the highest diagnosis rates of dementia in the country.

Now you’ve heard the term Dementia Friend, you will hopefully hear and see it more and more.

To talk to us about arranging a Dementia Friends Awareness Session for you or your organisation please call us on 01392 426 006 and ask to speak with Lydia or click here for more information!

And finally, we want to share with you an inspiring story from a Dementia Friend Champion:

The story of one Dementia Friend…

When Adam became a Dementia Friend through his work at the Fire and Rescue Service, he thought it would give him a better understanding of things to take into account when undertaking home safety checks. What he didn't expect was to draw on that learning outside of work:

“I was enjoying a Sunday afternoon film when there was a knock at my front door. Expecting it to be an electoral canvasser, I reluctantly answered but instead found an elderly lady, clearly very cold and very confused. She said she was looking for a particular street, as her brother lived there. Being local, I knew instantly that street didn't even exist in Chester, so asked her what her name was and where she lived. She could recall her name, but not her address or how she’d got to my street.

I invited her in and got her a glass of water, while I phoned the police’s 101 number. About 20 minutes later, two officers came and they were able to look in her purse for some identifying information. Eventually they established she lived with her daughter and son-in-law some 10 miles away. She had somehow left the house, without them noticing, with coat and overnight bag and we think, by means of a passer-by giving her a lift from their village, got into Chester. They were shocked but grateful she was safe and came immediately to pick her up.

Without my Dementia Friends awareness, I doubt I’d have understood why the lady was so immaculately dressed, why she could recall her name and that of her brother and why she knew precisely where she needed to get to (her childhood home)…but at the same time, didn't know how to get there and was unable to tell me where she now lived. I also recalled how people with dementia may not remember the detail of a recent encounter, but may nevertheless retain the feelings and emotions from it. For that reason, I had the confidence to stay calm, friendly and patient with her.”