Bluebird Care offices in Yorkshire are sponsoring Paul Terry and Stephen Hinchliffe to cycle from Lands End to John O’Groats to raise funds for the Alzheimer’s Society and Cancer Research. 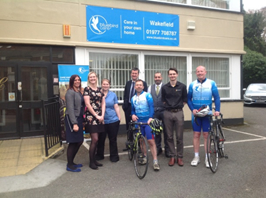 Bluebird Care offices in Yorkshire are sponsoring Paul Terry and Stephen Hinchliffe to cycle from Lands End to John O’Groats to raise funds for the Alzheimer’s Society and Cancer Research.  They plan to complete the 1000 mile journey in 9 days calling in at Bluebird Care offices enroute.  As part of their training for this challenge they will be cycling from Scarborough to York and then onto Harrogate and Leeds ensuring they pass through as many offices as possible.
Bluebird Care Wakefield is proud to sponsor this second challenge and welcomed Paul on Friday 15th April.   Last Year Bluebird Care Wakefield sponsored Paul for his first charity ride to raise funds for the local hospice.
Paul Terry started cycling in his mid-30s.

“I had just been diagnosed with Palindromic rheumatism arthritis and needed a way to become more active. I started by riding to and from work every day and as I felt myself getting fitter, I wanted to try more difficult rides. Today, I am a member of Ravensthorpe Cycling Club and I enjoy travelling round Britain to take part in challenging events.” 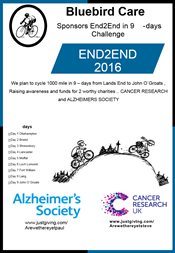 Paul sadly lost his granddad to cancer and the hospice he was in did such a good job looking after him he decided he wanted to give something back.
Paul and Stephen approached the Bluebird Care offices in Yorkshire to sponsor a team of riders to do a bigger ride and challenge.  All of the offices were keen to get involved and provide sponsorship.
Stephen Hinchliffe is 51 years old and has always enjoyed sport and exercise to keep fit and healthy.  He played professional rugby in his twenties for his local town Dewsbury and took up cycling when a knee injury cut short his rugby career.  Stephen says:

“I am a cancer survivor having come through second stage testicular cancer in my thirties and I now cycle regularly to keep fit and to spend time outdoors taking in the many amazing views that Yorkshire has to offer.I jumped at the chance to undertake the End to End challenge, it’s an amazing opportunity to test myself physically and mentally whilst raising much needed funds for two charities that both I and members of my family have been supported by over the years.”

Paul and Stephen will be accompanied by driver Ian Allsopp on their challenge which starts on 9th May.