A group of Bluebird Care Stafford team became ‘Dementia Friends’ recently, as part of a campaign to tackle the stigma and lack of understanding around the condition.

A group of Bluebird Care Stafford team became ‘Dementia Friends’ recently, as part of a campaign to tackle the stigma and lack of understanding around the condition.

Alzheimer’s Society’s Dementia Friends programme is the biggest ever initiative to change people’s perceptions of dementia. It aims to transform the way the nation thinks, talks and acts about the condition. The charity wants there to be a four million Dementia Friends with the know-how to help people with dementia feel understood and included in their community.

There are currently 850,000 people living with the condition in England.

Dementia Friends Champions are volunteers who talk to people about being a Dementia Friend in their communities. Speaking about the Session, Helen Lewis said:

I was so pleased to see people showing their support for people with dementia, by coming along to the Session and becoming Dementia Friends. We need to create more communities and businesses that are dementia friendly so that people affected by dementia feel understood and included."

Helen Lewis, Supervisor & Rick Parekh, Director at Bluebird care Stafford signed up to be a Dementia Friends Champion earlier this year and attended a training course on how to deliver the Sessions.

Helping people with dementia is very close to my heart and I’m so proud to be part of a growing network of people helping to create dementia friendly communities across England."
Anyone interested in supporting the campaign should go to dementiafriends.org.uk or call our office for more information on 01785 887889 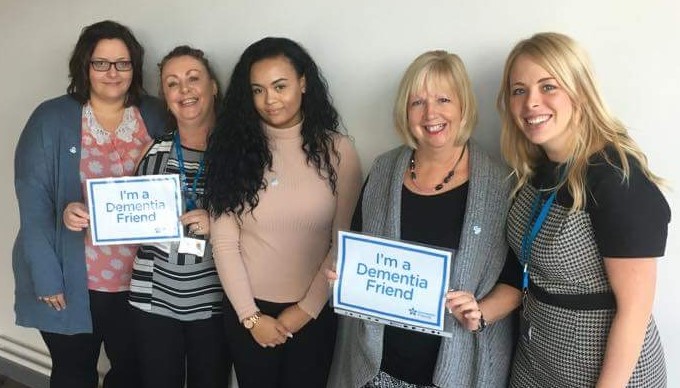