Our care manager, Nicky Beadle, was chosen as a runner up The Dignity & Respect Awards 2016, organised by Buckinghamshire County Council.

Our care manager, Nicky Beadle, was chosen as a runner up The Dignity & Respect Awards 2016, on April 15 at The Occulus in Aylesbury.

Nicky is one of just three people out of 70 who was nominated in her category, to be shortlisted for the award. It recognises the commitment of individuals and organisations who provide care and support across health and social care services in Buckinghamshire.

Nicky was nominated by owners Ian and Anne Inglis for her tireless commitment to improving the lives of older people.

For all her great work over the years, we decided that we would nominate Nicky. She makes a real difference to the lives of nearly 200 older people living in our community. We were delighted when we heard that she had been shortlisted.”
Nicky said:

I had no idea I was being nominated for the award, so the news that I had been shortlisted came as a complete surprise. I am honoured to have been chosen as a runner up for such a worthwhile accolade and I feel privileged to work with such a fantastic team and in such a rewarding role.”
As part of the judging process, Nicky was filmed at work and interviews carried out with colleagues and a customer. The film was then screened at the awards, view the video here.

Ian Inglis, Owner of Bluebird Care Slough, S. Bucks and S. Wycombe, accepted on Nicky's behalf as she was out of the country at the time.

The awards are part of the County Council’s Dignity and Respect campaign, in conjunction with the NHS, to raise awareness of the basic human right to be treated with dignity and respect.

Well done Nicky from all of us here at Bluebird Care Slough, S. Bucks & S. Wycombe, we are all very proud! 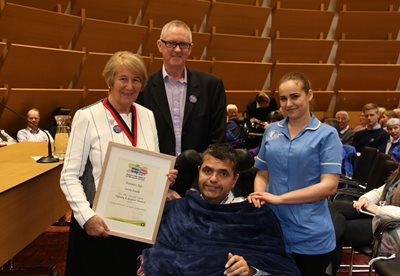