10 year old Charlie has undergone significant treatment for a brain tumour, and Burnham Football Club wrote to Chelsea to ask if he could attend a training session. They said yes, and this is the result! Charlie is a huge Chelsea FC fan and was over the moon to be able to meet his heroes.

The Community Day was arranged via the Chelsea Foundation, with the young fans and their parents watching the first team train before meeting the players afterwards for pictures and autographs.

Charlie and his mum had a brilliant day.

Commenting on the day, Nicky said:

“It was a fantastic day all round, but mainly it allowed Charlie to temporarily forget about his illness for a short while and it was wonderful to see him enjoy himself so much. Chelsea FC were absolutely fabulous and organised the day perfectly for us, and everyone in the office was so supportive in encouraging us me to take the time to accompany Charlie to meet his heroes at Chelsea FC. Certainly a day he will never forget!!”
Community Days take place on a regular basis throughout the football season and involves the Chelsea Foundation joining forces with a range of charities to arrange even days for seriously or terminally ill supporters and their carers, giving them a well-deserved break from what is obviously a difficult time for them and their families.

There is also an article featuring both Nicky and Charlie on the Chelsea FC website, which you can read here. 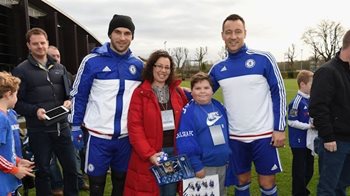