Congratulations to Bluebird Care South Tyneside care assistant Christine Graham, who has been announced as a national finalist in the Bluebird Care Awards.

Christine Graham has been a care assistant at Bluebird Care South Tyneside for 5 years and had recently been nominated by her peers to represent the region at the inaugural Bluebird Care Awards 'Carer' category. In doing so, Christine has been awarded 'Regional Carer of the Year' for the North of England region. 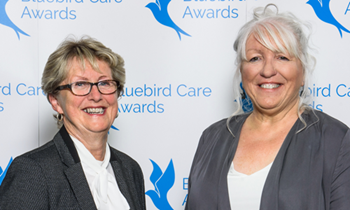 Christine was nominated by Bluebird Care South Tyneside’s director David Haswell, beating carers from across the region to win the regional award and national nomination.

Christine specialises in the care of customers with dementia, and received her nomination due to her dedication to those she cares for. It is a role that is so important in mitigating loneliness in older people today and Christine handles any challenges encountered with a calm and cheery demeanour. She is a positive role model with an infectious personality, and will always go above and beyond for her customers. Most recently, Christine organised a birthday party for a Bluebird Care customer, helping them reconnect with their neighbours and provide an enjoyable day for all.

Her win means she will represent the North of England region at the national final at Fortnum and Mason, London, on September 6, where national winners in each category will be decided by an independent panel of judges made up from media, the charity sector and the United Kingdom Homecare Association.

The awards ceremony recognises the outstanding contribution that carers, registered managers and team members make in improving the lives of Bluebird Care customers.

Christine said of her regional win;

I have always enjoyed looking after my customers, and can honestly say that I love my job. It’s an honour to work with so many interesting, kind and passionate people,  and I really appreciate being named the North’s Carer of the Year."
Bluebird Care Chief Operating Officer Duncan Berry said:

Bluebird Care is privileged to have thousands of extraordinary people providing care and support to our customers every day. With so many brilliant nominations to choose from it has not been easy to select our regional winners. However, our regional winners were able to demonstrate truly exceptional qualities and commitment that saw them take their place in the national final. I want to congratulate all of our winners for their dedication to our customers and wish them good luck for the national final.”
The awards follow on from Bluebird Care’s Every Visit Counts campaign (www.everyvisit.co.uk), launched in July. The campaign raises awareness of the devastating yet silent loneliness epidemic in Britain and highlights the key role that carers and care assistants can play through providing excellent care and companionship.