‘I felt instantaneously this is where I should be’

‘I felt instantaneously this is where I should be’ - Joanne's story, July 2018

I’m Joanne Smith and I have worked for Bluebird Care for four years, starting back in 2014 when the South Oxfordshire branch first opened.

Many moons ago, I studied Health and Social Care at sixth form. Although I didn’t start my care career straight away, after a number of work placements, I decided that my passion did lie in supporting older vulnerable people.
Before joining Bluebird Care, I worked for eight years in a Care Home. Although I enjoyed this, there was no career progression. I went to meet the Director of Bluebird Care along with the Care Manager and felt instantaneously that this is where I should be and here I am today! 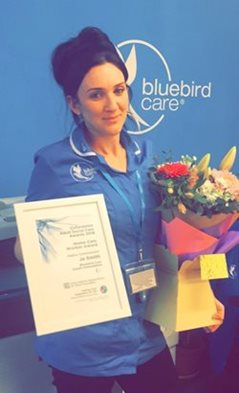 I joined Bluebird Care as a care assistant and enjoyed my time fulfilling my job role and what was expected of me to the highest standard that I could. I was promoted to Support Supervisor after a year. This job role meant that I still worked one to one with the customers that I built a relationship with, but I took on more responsibilities such as spot checks, medication checks and meetings with the customers to ensure they were satisfied with the care that they were receiving.

After a year, I then became a Supervisor. I was then more closely involved with the office and the running of things behind the scenes. This also gave me the opportunity to learn a range of new skills and I began to quickly realise what goes in to keeping a care business running smoothly.

As we grew, I was then appointed Lead Care Supervisor. Throughout my career I have understood the importance of continuing to develop my skills and attended short courses. My latest one being around dementia. I became a Dementia Champion, working alongside The Alzheimer’s Society to educate people about Dementia and signposting where they can seek support. I am currently doing my NVQ 5 qualification. My ambition for the future is to carry on doing what I feel passionately about and perhaps one day become care manager, something the NVQ qualification would support me with.

I would always say to people thinking of pursuing a career in care that it is not for everyone and you do need to be a special type of person to do it.  I always suggest approaching care work as if you were caring for your own, that way you know you will be providing the best care possible and never give any less than your best at all times. A bad experience in care can be just as valuable as a good one. It will help you learn more about your abilities and whether your role is really right for you.

I enjoy the relationship that I have with all the people that I support. I get great job satisfaction from seeing the positive changes my team of carers make to people’s lives. The job is incredibly rewarding and I go home with a smile on my face nearly every day.