David Williams who is a care assistant at Bluebird Care Macclesfield, has completed the Step out for Stroke walk in order to raise money for the Stroke Association.

On Saturday 4th June 2016 David Williams who is a care assistant at Bluebird Care Macclesfield, completed the Step out for Stroke walk in order to raise money for the Stroke Association.

David originally attended a training session on stroke awareness with our communication support coordinator Christine Wilson, this in turn encouraged him to want to do more for those that have suffered a stroke as well as their families.

Step out for Stroke 2016 launched in May with the hope of encouraging individuals as well as families to put on their walking shoes and join in on one of their sponsored walks. The aim of these walks is to raise further funds for the work the Stroke Association carries out, with each route set up as 1 mile allowing individuals to complete the walk at their own pace.

The Stroke Association is the UK’s leading stroke charity, supporting both those who have suffered a stroke as well as their families. 152,000 strokes happen in the UK every year, although individuals are twice as likely to survive a stroke today than they would have 20 years ago, thanks to the improvements in stroke care. Still, having a stroke is a one of the biggest causes of death in the UK.

David Williams, commented on the event:

Even though it was a very warm day, I managed to complete the walk on Saturday with ease raising £100 for the Stroke Association, which I hope can go towards supporting those who have suffered a stroke. Thank you to Bluebird Care Macclesfield for offering the training session, as without this I would have not known about the event.” 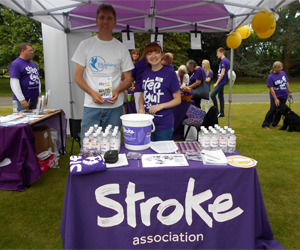