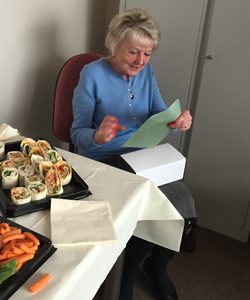 The office was tinged with a hint of sadness as we said a fond farewell to Jane who has been a loyal member of our team for almost six years. During the celebrations, Jane was presented with a personalised cut glass keepsake and a bottle of her favourite tipple.

Jane joined us in 2010 at the age of 63 having not previously worked in the care sector but she quickly became a valuable asset to the team as well as becoming a poster girl for promoting 50+ recruitment. Jane has even been interviewed by Skills for Care for a case study on what it’s like to be a care assistant and why she decided to join the profession. The video of Jane can be viewed on our Careers page.

During Jane’s time here at Bluebird Care Macclesfield, she has won multiple awards including our very own ‘Care Assistant of the Year’ for two consecutive years. Jane has also been recognised in national awards after becoming a regional finalist at the Great British Care Awards in 2012.

From all of the team here at Bluebird Care Macclesfield, we would like to wish Jane a very happy retirement, she will be dearly missed. Luckily, it’s not a final goodbye as Jane is keen to stay involved by continuing to be an ambassador for promoting and encouraging a mature workforce who have so much to offer in a flexible caring capacity. 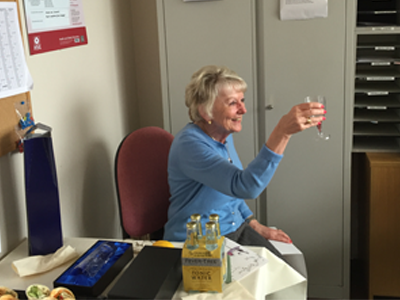