Joe, the husband of one of our customers (Sue) who suffers from a rare form of dementia called Posterior Cortical Atrophy, (PCA) will be taking a week in June to do a Land's End to John O Groats run in a classic Citroen 2CV raising money for charity. 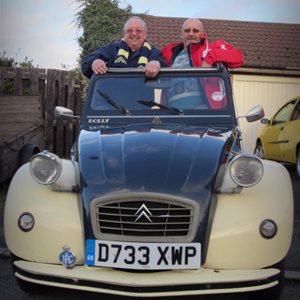 Bluebird Care Macclesfield will be supporting the ‘Joes 2CV Challenge’. Joe is the husband of one of our customers, (Sue), who suffers from a rare form of dementia called Posterior Cortical Atrophy, (PCA). Sue was only 58 when she was diagnosed with PCA and at this stage she had already had it for five years.

Posterior Cortical Atrophy is a progressive degenerative condition involving the loss and dysfunction of brain cells, particularly at the back (posterior) of the brain and in the vast majority of cases, this loss of brain cells is associated with the same pathological brain changes seen in typical Alzheimer's disease, so PCA is usually considered to be an a typical variant of Alzheimer's, but unlike Alzheimer’s ; the patient is aware of the decline.

Joe and Chris will be departing on the 8th June from St Stephens Care Home in Elworth at 3pm, where they will journey to Lands’ End down south, then all the way to John O’Groats in Scotland and back home again, all in a classic 2CV!

You can find details of the challenge on facebook and also via http://www.virginmoneygiving.com/2CV-Challenge. (where you can offer a donation).

Bluebird Care will be in attendance on the day offering their support.