Bluebird Care Leicester's Richard Atkinson makes the finals for the Care Manager of the Year award.

Bluebird Care Leicester's Richard Atkinson makes the finals for the Care Manager of the Year award.

Richard said of the event " Its's an honour to be nominated for this award in such prestigeous surroundings, and altghough I am here, I have a wonderful management team to help me and a great team of field care staff that make the service we provide such a success."

Richard was a runner up this year due to tough competition. The standard within the Bluebird Care network nationally is very high and branches throughout Britain and Ireland are doing exceptional things for the elderly in their respective communities.

It was however, a great day out - just a bit of a break from the norm, just a little something to break the 9 - 5
Congratulation Richard - we are very proud of you and your achievements! Well done. 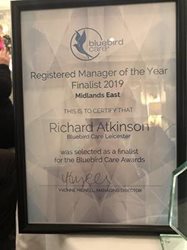