We are delighted to be sponsoring the promotional ride of two cyclists, Paul and Stephen as they train to cycle 1000 miles from Land's End to John O'Groats - from the far south-west to the far north-east of the mainland British Isles.

Bluebird Care Harrogate in conjunction with other Yorkshire franchises are sponsoring cyclists Paul Terry, Stephen Hinchliffe and their driver Ian Allsopp to ride from John O’Groats to Lands’ End. The ride will start on Friday 6th May 2016.

Paul and Stephen are attempting the cycle challenge on behalf of Alzheimer’s Society and Cancer Research.  The challenge should take 9 days and both will be aiming to complete about 100 miles per day.

The guys are undertaking this in partnership with Bluebird Care and currently cycling around the Yorkshire region drumming up support for their attempt. This leg incorporated Scarborough, York and Harrogate, and they will shortly be visiting Leeds, Wakefield and Sheffield.

Commenting on the challenge, Paul said:

This is a challenge I have always wanted to take on. I’ve been with Ravensthorpe Cycling Club for 6 years now and I enjoyed fantastic support from the club and Bluebird Care to make this possible."
To find out more about the end to end challenge, visit their website here. To sponsor Paul and Stephen you can visit their JustGiving page, to help them raise money for their charities. 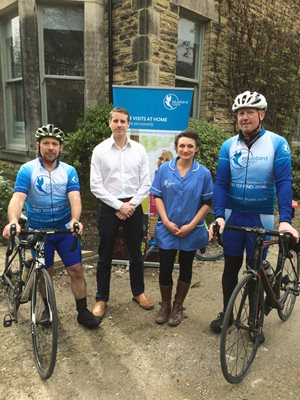