We were delighted to have our customer Christmas Party Afternoon featured in two local newspapers.

We were delighted to have our customer Christmas Party Afternoon featured in two local newspapers.

The Customer Christmas Party afternoon took place on Wednesday 16th December between 2pm and 4pm. We chose Fairlands Community Hall as the venue for this year’s party.

Guests enjoyed sherry, mince pies, nibbles and some of the 70 cupcakes made by support supervisor Julie Hazell, whose 91-year-old mother, Mary Powell, made a beautiful teddy bear for the guess the name of the bear competition.

The story about our Christmas party was picked up by both The Herald and The Surrey Advertiser, which we are very excited about.

The party was a great success with everyone having had fun, whilst raising £200 for charity in the process. 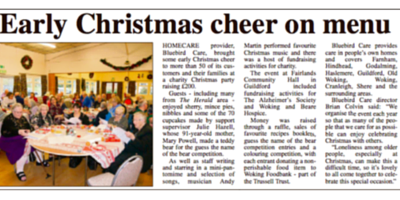 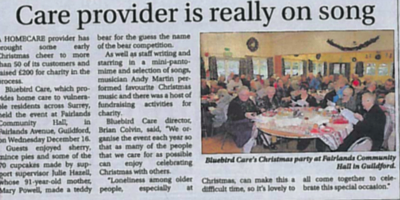