To mark the 100th anniversary of women being given voting rights, we're launching the search for Devon's Most Caring Women.

As the UK begins its celebrations of 100 years of women’s right to vote, Devon is voting for its own local, female heroes who are still inspiring change today. 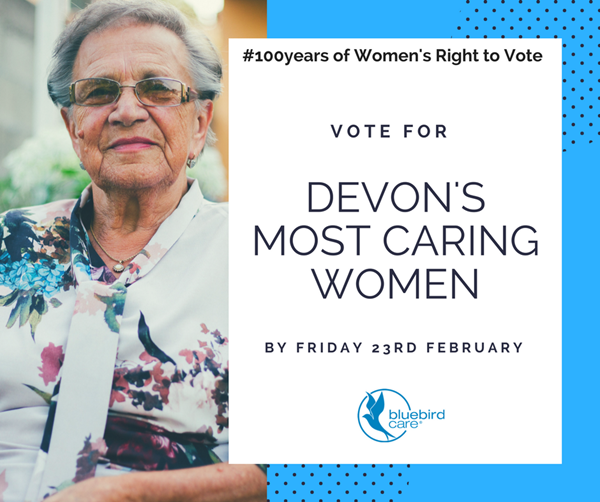 February 2018 marks 100 years since women were first given the right, after decades of struggle and hardship, to vote in Britain in parliamentary elections.

To mark this centenary, Bluebird Care Exeter are asking the people of Devon to cast a vote of their own and vote for the local Devon women in their communities that have cared enough to stand up for something they believed in.

The history books are filled with Devon’s notable and inspirational women. From Honiton Mayor and Suffragist Juanita Phillips to 18th century botanist Amelia Griffiths, the legacies of these remarkable women have helped enrich the cultural, social and economic life of our county.

But today our local Devon communities are filled with untold tales and unsung female heroes, who continue to bring about change and instill hope in those around them each and every day. Bluebird Care Exeter wants to help share and celebrate these stories of Devon’s most caring women.

They particularly would like to hear from 18-year-olds who live locally, and who will have the opportunity to vote for the first time this year. This is the chance to vote for their elderly grandmother or a female figure who has inspired them, and to pass on their wisdom.

This builds upon Bluebird Care Exeter’s successful 2017 #talkcare campaign, which launched in December in collaboration with Devon County Council, Age UK Exeter and Hospiscare. The 2018 #talkcare campaign will focus on the shared wisdom of older generations that lies beneath the surface of our local communities.

Readers can cast their vote by tweeting the woman’s name by Friday 23rd February to @BluebirdCareExe or on Instagram at @bluebird_care_exeter, with the hashtag #100YearsDevon.