George Tutton from our Essex West office successfully completed his sky dive on the morning of 28th February, raising a staggering £450 for Alzheimer’s charity.

George Tutton from our Essex West office successfully completed his sky dive on the morning of 28th February, raising a staggering £450 for Alzheimer’s charity. Despite the cold, gloomy weather, George spent his Sunday morning taking a giant leap of faith from the skies. Reaching around 1300ft in the air, slightly higher than expected due to cloudy weather but this did not stop George in his aide to completing the jump. 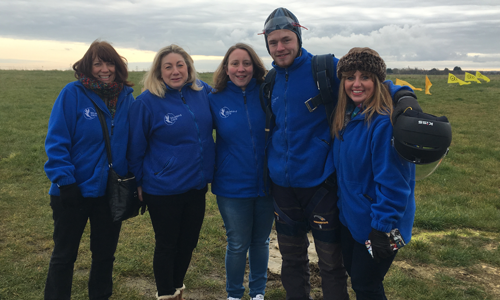 George was supported by Bluebird Care Owner Tracey McCormack and supporting members of the Essex West office as they cheered brave George on. The fundraiser proved a huge success and we couldn't thank everyone involved enough, especially those who sponsored George. #charityabovetheclouds

It was an amazing experience overall and something that I would do again in a heartbeat! It took 8 ½ minutes but felt like 30 seconds, falling at 170mph. As soon as I touched the ground, I wanted to just go straight back up there and relive the whole experience again!

This whole experience has been amazing and as a care assistant there is no better feeling than helping people. Bluebird Care Essex West are dedicated to giving the best support to our customers and the people that need our help. I had to raise around £395 so I could do that jump and I totally smashed that target, it was even more satisfying and I couldn't have done it without everyone who sponsored me. The money raised will help the charity to provide the best support for the Alzheimer’s community and I would like to thank you all for the fantastic support and kind words and look forward to everyone sponsoring me in my next crazy event, whatever that may be.”