The East Devon homecare agency’s person centred care and new management have been praised by the Care Quality Commission, which rated the service as “good” overall following a comprehensive inspection in September.

Bluebird Care East Devon's person centred care and new management have been praised by the Care Quality Commission, which rated the service as “good” overall following a comprehensive inspection in September.

The agency provide care and support to people living in their own homes across East Devon and the regulatory body reported that staff had established good relationships with their customers and worked closely with local health professionals such as nurses and GP’s.

The inspector highlighted receiving consistent feedback from customers of the positive and caring nature of the staff and said they treated them with “dignity and respect”. The CQC reported many customers saying that the “best thing about the agency was the staff”. Customers described the team as “Gentle”, “caring and compassionate” and they were all found to be nice, genuine and friendly.

Director William Flint has welcomed the report which was released on the 4th November 2015, saying:

“Our CQC inspection was the most rigorous we have experienced and is reflective of the changes in how care companies are now being reviewed. Therefore I am very pleased with the rating of 'Good'; it is a testament to our hard working diligent staff and thanks to the feedback of our many customers that we have achieved this rating. We are particularly excited about the future of our services in East Devon and this inspection report is a very sound building block”
The report praised the open and honest culture of the service and was pleased to see comprehensive safeguarding and whistle blowing policies in place. The inspector felt the “care and office staff worked well together as a team”.

Jasmine Broome joined Bluebird Care East Devon in June this year as the Business Leader and is currently working towards Registered Manager status. Broome has worked hard over the last three months to create a positive working environment and has championed the person centred care approach the agency is renowned for. The inspector stated that customers, relatives and staff all reported significant improvements at the agency in the last few months and that the agency sought their feedback and made changes and improvements in response.Relatives said they appreciated how staff were courteous to them and included them through regular communication, so they were aware of any concerns, which was very helpful.

The CQC were impressed with the homecare agency’s approach to person centred care, with one relative saying “they take their time and are never in a hurry”. The staff promote choice and treat each customer as an individual.

“Care records showed people were supported to express their views and were actively involved in decisions about their care” said the report. Each customers care record includes a section called “What is important to me” which gives details of the person’s life, their family, religion, hobbies and interests and what’s important to them. For example, how one person likes to go to bingo on a Wednesday. The agency also encourage socialising and aim to tackle isolation by organising outings; which customers, relatives and staff are invited to attend.

Additionally, the report found that the agency have effective systems in place for monitoring staff performance and that they use good practice initiatives across their reward and recognition programme, including a “Care Worker of the Month” award. Staff were very enthusiastic and positive about their role and the people they care for, with one staff member saying “I enjoy making someone’s day, it’s very rewarding”

“Every colleague at Bluebird Care East Devon should be so proud of this achievement, however, we will never become complacent. Our customers will remain at the very heart of everything we do as we push towards a status of ‘outstanding’”

Bluebird Care East Devon was established in 2013 and has exciting plans to expand its reach across East Devon further in 2016.

A full copy of the inspection can be viewed at http://www.cqc.org.uk/sites/default/files/new_reports/AAAD4754.pdf 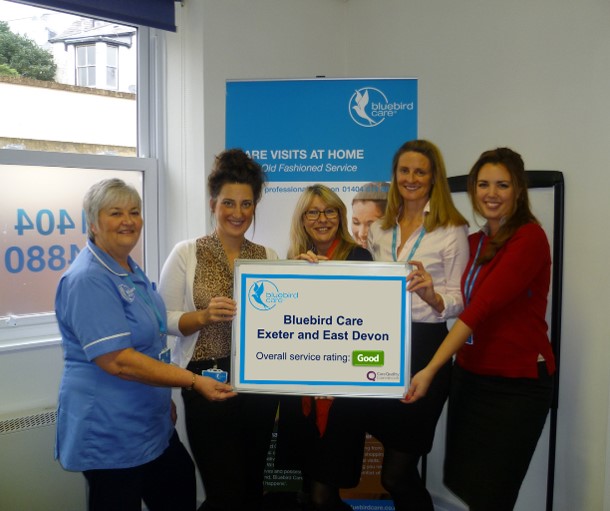