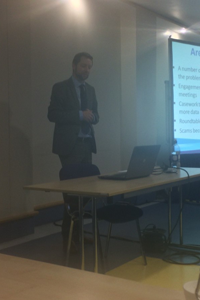 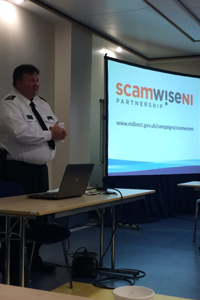 Each year in Northern Ireland it is estimated that £100million is lost to scams, and with most of the scams being operated from outside the UK, it is extremely difficult to trace the perpetrators and return the money lost.

This event highlighted that older people are a high risk group for scammers due to their vulnerability, lack of awareness of scams, and in most cases they are more trusting.  The major impacts on those who have been targeted by scammers can be financial hardship, withdrawal from friends and family or family breakdowns, and stress, anxiety, and depression. 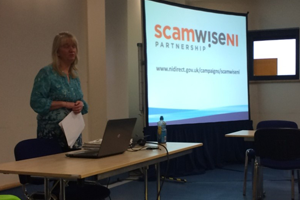 Beverly Burns talked in depth about the many types of scams that are circulating via telephone, email, text message, post, and rogue traders, and highlighted the fact that there is a ‘scam for each and everyone’.

She highlighted the sophistication of such scams which include catalogues, lotteries, psychics and clairvoyants, scratchcards.  Other scams included the imitation of Charities, letters from solicitors, emails and text messages from HMRC, Paypal, and banks, there is also an increase in scams over Social Media.

Sgt. Terry McKenna highlighted the main emphasis of Scamwise NI is to prevent people from becoming victims of scams through education and awareness. 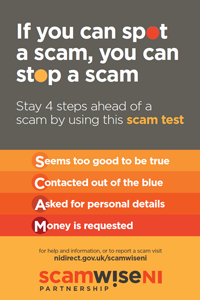