The descent of 101 metres was undertaken by Rob who was part of the Waggon & Horses pub team. The group were raising funds for the Ronald McDonald House at Alder Hey Children’s Hospital, in order to provide facilities for parents to stay overnight with their poorly children. The group managed to raise a staggering £6,000 for the charity!

There was also a celebrity appearance from Coronation Street actor Les Dennis who came along to support his wife who was part of Rob’s team. Bluebird Care Cheshire East were delighted to support Rob in this important (and very brave!) activity.

Well done to Rob and the team for all their hard work and bravery!! 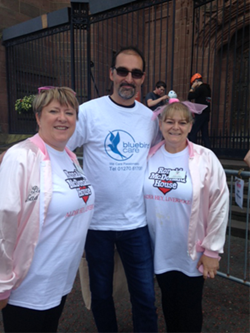