WE REALLY DO MAKE A DIFFERENCE…

"The Persistence of Memory" painted by Salvador Dalí in 1931, sometimes referred to by more descriptive titles, such as "Melting Clocks". What does this have to do with providing care?

"The Persistence of Memory" painted by Salvador Dalí in 1931, sometimes referred to by more descriptive titles, such as "Melting Clocks". What does this have to do with providing care?

One of our customers painted it and gave it to our carer Lindsey Booth.  In Lindsey’s words this is how it came about:

“I first started visiting AC in February, on my first visit he apologise profoundly for having too many to drink, he was late in answering the door because he had a little accident, I told him there was no need to apologise and cleaned up and Gladly went about my duties (Cleaning call), whilst cleaning I noticed some exceptionally well painted pictures hanging on the wall and some in carrier bags in his bed room (was changing the bed). On closer inspection of the pictures on the walls I noticed they were signed by AC.  At the end of the call I asked if I could sit with him and do my notes, I made sure he had his life line on first as he looked quite tired, whilst I was sitting there, I asked did he have any children? (what I thought to be a harmless question) AC said he and his wife did have a child but he was in a car accident and his boy died, he was only in his 20s. It was my turn to apologise profoundly. AC said it was a long time ago a not to worry.

As time went on, at the end of each call I would sit and talk to AC getting to know him a little better. Things like, what music he liked (The Composer Wilhelm Richard Wagner) best known for the music Flight of Valkyries. AC didn’t like that Piece though. He also was opening up more and told me he listened Black Sabbath as well, he came to like it due to his son playing it when he was alive.
AC opened up about anxiety issues and said he had never been a people person.  I asked him about his painting and he said he painted when he was at school and took it up again when his son died, but had not painted in along time. I said that was a shame because he is very talented in my opinion.
On my next visit I went and sat with Alan at the end of my call. He had a photo album out and asked would I like to see some of the paintings he has sold, OMG. Amazing.

AC also had art books on his living room floor. On the end of one visit I started looking through the famous art work. Saying which ones I liked, I found one that spoke to me. Salvador Dali, I didn’t read what the painting was called I just said it remind me of how precious time is and if we are not careful how time can slip through our fingers and literally melt away. Knowing that this is not a style AC would normally paint in I asked him what he though. He said it was not his style but he could paint it. I was surprised, as by his own admission he had not painted for a very long time. I didn’t expect anything, but on my next visit there was a blank canvas, (dare I hope?).  AC informed me at the end of the visit he was going to paint the picture that spoke to me. On each visit AC seemed a lot brighter and the house is beginning to smile again. The painting is coming along nicely and is brining AC along with it.” 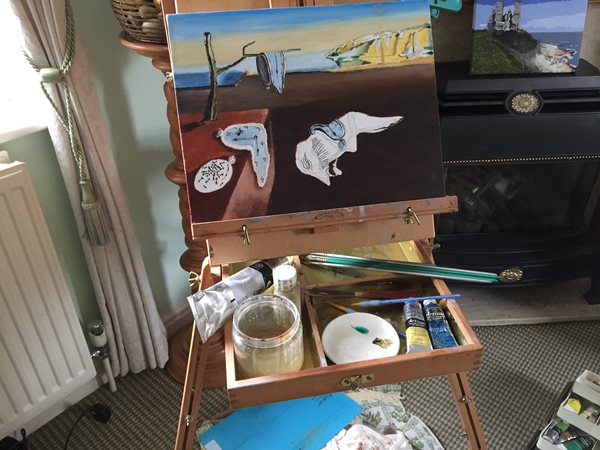 Unfortunately, this customer has now passed away.  However, we are extremely proud of the fantastic work that Lindsey did with this gentleman, she also has the gratitude of his family.

Lindsey now has the finished painting at home and loves it. 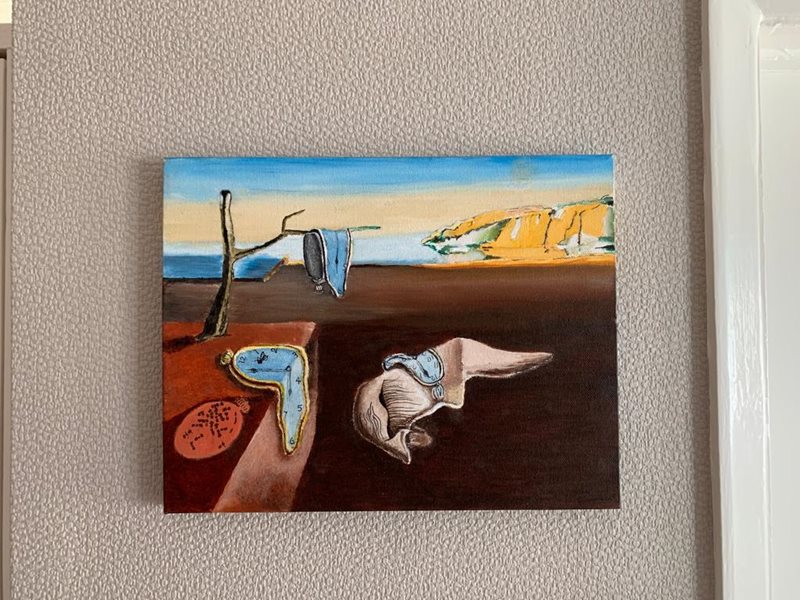