Differences between Dementia and Alzheimer's

By 2015 there will be roughly 850,000 people in the United Kingdom and 35.6 million people around the world living with dementia. Therefore it seems surprising that many people are unaware of the differences between dementia and Alzheimer’s.

Dementia first and foremost is NOT a disease. It is in fact a group of symptoms that affects certain mental tasks including memory and decision making.

Dementia is triggered by several different conditions, the most common being Alzheimer’s disease. As dementia develops it makes it incredibly hard to do normal everyday tasks, and will often resort in the person not being able to function independently. This process can be very emotionally and financially draining for close family members.

Dementia usually begins with small episodes of forgetfulness, with the person losing their concept of time and struggling to find their way in familiar setttings. As dementia becomes more severe, the person will become progressively more forgetful and confused. It will be a challenge for them to remember faces and names and they will generally not be able to care for themselves.

The most obvious signs of dementia are repetition of questions, poor hygiene and the inability to make good decisions. In an advanced stage it is not uncommon for their behaviour to change and can sometimes turn into depression and aggression.

With 40,000 younger people living with dementia in the UK, it proves that dementia doesn’t just develop in old age, however it is more likely to develop as you get older.

Diseases such as Alzheimer’s, Parkinson’s and Huntington’s are all potential triggers of dementia, with Alzheimer’s being the cause for 50 – 70% of the cases. Some of the less common causes of dementia include depression, some types of brain tumour, long-term alcohol dependency and head injuries.

Alzheimer’s gradually ruins memory and thinking skills, and eventually will destroy the ability to do simple everyday tasks.

The Alzheimer’s brain starts to become damaged years before symptoms are noticeable. Brain cell connections are lost and will begin to die. Brain scans have even shown significant shrinkage, which shows the huge impact Alzheimer’s disease has on the brain.

Alzheimer’s can be very aggressive and quick to develop, with some people dying as little as three years after diagnosis. This short amount of survival time is mostly in people over 80 years old, with younger patients sometimes living 10+ years with the disease, however most people are diagnosed after the age of 65. Although there is medication available that can manage Alzheimer’s, this devastating disease is completely irreversible. 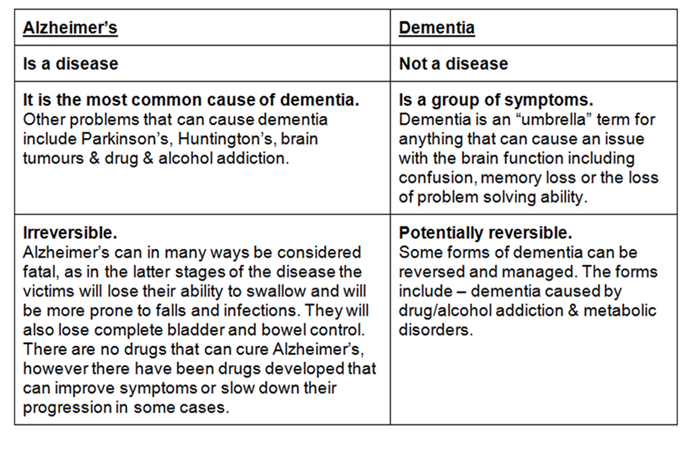