It is often perceived that when someone needs care, their care needs increase as their health deteriorates. Here we tell a moving story where Colin from Alresford was helped back onto his feet following a life threatening accident that could happen to anyone of us… 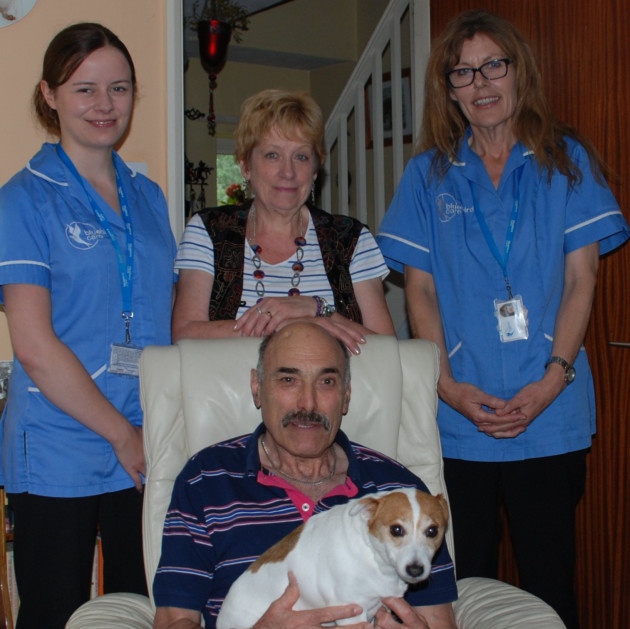 When Alresford gardener Colin suffered the double-misfortune of a stroke and a serious fall while at his daughter’s house, it was touch and go whether he would survive.

Now, with the help of Care Assistants from Bluebird Care Alton and Alresford, he is back in his own home with his partner Joy, and fighting his way back to fitness.

It was in January 2014 that the 66-year-old was struck down. Admitted to the Queen Alexandra Hospital in Portsmouth, he was in a coma for over six weeks and the doctors weren’t sure if he’d come round. Amazingly, Colin began to show signs of life, and started to recover, although the illness had taken a terrible toll, leaving him unable to speak, walk, or even eat without the aid of a feeding tube.

In September last year, after eight months in hospital, Colin was allowed home, with the help and support from Bluebird Care who visited in pairs, four times a day.

“When he first came home, he couldn’t do anything,” says Joy. “We had all this equipment in the house, with a hospital bed in the living room, but he couldn’t stand or talk, had a catheter in, and had to be fed through a tube for all his food and medication.”

Bluebird literally got Colin back on his feet

Colin’s first Care Assistant from Bluebird Care, Emma Webb, was joined by a core team of four other Care Assistants including Alison Flesher (both pictured), and over the months, they helped Colin not just with basic personal care, but a host of other ways to quite literally get him back on his feet.

“It’s with the help of the incredible Bluebird Care Assistants that we’ve pushed him and pushed him,” continues Joy.

Alison sees a lot of the Care Assistant’s role as building Colin’s confidence. “Until we did that, we couldn’t ask him to do things for himself,” she explains.

“Now, it’s a case of giving him little reminders – Colin’s had to re-learn and re-train in things.”

As well as helping him to walk again, the Bluebird Care team helped Colin re-learn everything from reading through to dressing himself, all of which he has successfully mastered.

“The brain is repairing itself all the time, but it hasn’t been quick,” says Joy.

“If you said something to him, he may not answer straight away, because the brain was trying to find a path that went another way. Now, you can have a conversation with him, and he remembers things. He’s a gardener, and he learned all the shrubs’ and bushes’ Latin names. He came out with a Latin name the other day and I don’t even know its name in English! So it’s all coming back, bit by bit. The only thing he has problems with is people’s names – he knows who they are, but sometimes can’t remember the name.”

Joy is in no doubt that a key factor in Colin’s recovery has been being cared for in his own home.

“In hospital, they just don’t have enough staff for one-to-one care, so he was left on his own a lot,” she reflects. “When he did come home, he couldn’t do much at all. It’s only since he’s been at home that Bluebird and I have been able to push him along and he’s got this far. If it hadn’t been for Bluebird Care, I don’t think I’d have been able to cope.

“I could not have done it on my own. Because I still had to work, Colin’s daughters came in to look after him two days a week when I wasn’t there, but they both had to return to work after a certain amount of time,” she adds.

Caring for Colin has been so inspiring

Colin himself describes his Bluebird Care Assistants as “amazing”. He adds: “Without these people, I wouldn’t have done anything. They are brilliant. I have to say that.

“This lady,” he adds, pointing to Alison, “is brilliant. She brought me up to where I am now. Because of her, I can get myself out of bed, and off to the bathroom.”

Colin’s visits from the Bluebird Care team are now down to one 45-minute visit per day, plus a couple of additional lunch visits during the week until he overcomes difficulties with swallowing. He has even managed to get back outside to do some gardening, and the team have found working with him hugely satisfying.

“With a lot of the work we do in Bluebird Care, we don’t have this sort of result as it’s a different kind of care,” says Alison. “So when we meet someone like Colin, it’s wonderful, and it’s so inspiring.”