Bluebird Care has doubled the scope of its revolutionary JET (Joint Emergency Team) Service following a highly successful five-month pilot earlier this year. The Bluebird Care JET Service initially operated across 10 GP practices in the Winchester, Eastleigh, Andover and Stockbridge areas. This has now been extended to 18 GP surgeries to also include the Alresford, Bishops Waltham, Wickham, West Meon and Whitchurch areas. 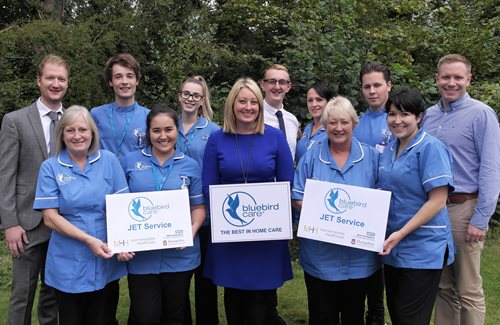 The Bluebird Care JET Service has been such a resounding success that it has prevented a staggering 158 people from being admitted into hospital in just six months. This has resulted in massive savings for the NHS, with the average UK hospital admission costing £1,800 per patient.

The Bluebird Care JET Service was set up as a rapid response service designed for GPs, District Nurses, Winchester’s Royal Hampshire County Hospital and Andover’s War Memorial Hospital to refer their patients to receive emergency care in their own homes to prevent hospital admissions. The service is a partnership between Bluebird Care, Mid-Hampshire Healthcare, the NHS West Hampshire CCG and Hampshire County Council.

The Bluebird JET pilot has now been made a fully-fledged service. In addition to it being extended geographically, its remit has also been increased to incorporate patient observations, reporting back to local GP practices on areas such as blood pressure, heart rate, respiration rate, oxygen saturations and body temperature to name a few. This is a wonderful demonstration of how social care and health care are working together to care for people in their own homes and reduce the bed blocking pressures in our local hospitals.

Norman Murphy, Owner & Managing Director of Bluebird Care, said: “The Bluebird Care JET Service has proved to be a vital service for both our local community and GP practices so we are thrilled to extend the service to more people throughout our local area.

“It has given us immense pride to relieve the bed blocking pressures in both the Royal Hampshire County Hospital in Winchester and the Andover War Memorial Hospital which are both at maximum capacity and we look forward to continuing our positive impact.

“The JET Service has been designed to prevent people being admitted to hospital that don’t really need to be there. We are now working with the NHS to explore options to help relieve the equally pressing problem of speeding up the discharge process of patients from hospital.”

Philip Heiden, Director at Mid-Hampshire Healthcare, said: “We are delighted to take the success of the Bluebird Care JET pilot to develop and expand it into a fully-fledged service.

“It’s clear that with the correct community social care support, thousands of people that are unnecessarily admitted to hospital can be cared for just as well, if not better, in their own homes and Bluebird Care have shown they are the perfect partner to deliver this.

The Bluebird Care JET Service is a partnership between Bluebird Care, Mid-Hampshire Healthcare, the NHS and Hampshire County Council. http://www.midhampshirehealthcare.co.uk.